In Orange County, we are blessed and cursed with sun year-round. It is beautiful, but bad for your skin. The sun causes brown spots called solar lentigines on the face or any sun-exposed areas. Luckily, there’s a number of options for removing solar lentigines.
The first thing to mention is how important it is to wear sunscreen every day and use sun-protective strategies like hats and shades. You can spend a lot of effort (and time and money) getting rid of your solar lentigines. But if you don’t protect your skin from the sun, they can come back or you can get more.
The main treatments for solar lentigines are: light-based devices, topical products, and chemical peels.
The “slam dunk” treatment for solar lentigines is a light-based treatment called “IPL” (intense pulsed light) or photofacials. In our practice we use a form of photofacial called “OPL,” optimized pulsed light, by Palomar. The device is called the ICON Max G or Max Y. This is the Cadillac of IPL devices, with peak powers far superior to other IPL devices. The Max G treats red (broken capillaries) and brown (solar lentigines) on the face or chest. The Max Y treats brown spots on the chest, arms, hands, legs, and back. This technology is very reliable, meaning it almost always works, in the right candidate. The right candidate is fair, not tan, and has brown spots that are significantly darker than the normal ‘background’ skin. The device targets pigment and has to have a target that is a different color than the normal skin.
In general, 3 OPL treatments are necessary for a dramatic improvement in solar lentigines. You wait approximately 1 month in between treatments. OPL can be done anywhere on the body with solar lentigines.
Topical products also work for solar lentigines. In general, they will be most successful in people who have lightly colored lentigines, that aren’t that different in color than the rest of their skin. The most effective topical product is hydroquinone (HQ) 4% cream. Hydroquinone (HQ) is a prescription product. At our office we sell it in two forms. One is as a part of a skin care kit called Obagi CRX. This is a great kit. It contains 4 steps for the morning (a cleanser, serum with 4% HQ and Vitamin C, a day cream with glycolic acid and a mineral-based sunscreen) and 2 steps at night (the same cleanser, and a nite cream with 4% HQ and Vitamin C). This Obagi kit is different than an older Obagi kit called NuDerm, which caused a lot of peeling and irritation. The Obagi CRX does not cause peeling or irritation, and in general most people experience a gradual lightening of brown spots within 2-3 months. The other formulation is compounded in our office, and is called Brightening Complex. It is a base lotion with arbutinin and kojic acid which also fade pigmentation, mixed with 4% hydroquinone. This is a very simple twice a day regimen for reducing solar lentigines.
I do believe that hydroquinone is a very safe topical medication. It has never been tested in pregnancy or lactation, so we don’t recommend that pregnant or nursing women use it. There is a rare side effect called exogenous ochronosis which is a strange discoloration of the skin, this is most common in people who use high concentrations of hydroquinone for long periods of time. So I only recommend using Obagi CRX or Brightening Complex for up to 6 months at a time. In general, one Obagi CRX kit or bottle of Brightening Complex will last approximately 3-4 months.
The last treatment for solar lentigines is chemical peels. The most effective peel is called the Revitalize peel. It is done by our Medical Esthetician, Lindsay. The advantage of the peel is that it also results in tighter pores and brighter skin overall. The downside is that there is a good amount of “peely” skin for 7 – 10 days. I have found that topical products along with the Revitalize peel can give a dramatic improvement in the overall appearance of the skin, not just the solar lentigines. This photo is of a patient who used Obagi CRX for approximately 3 months, and one Revitalize peel. 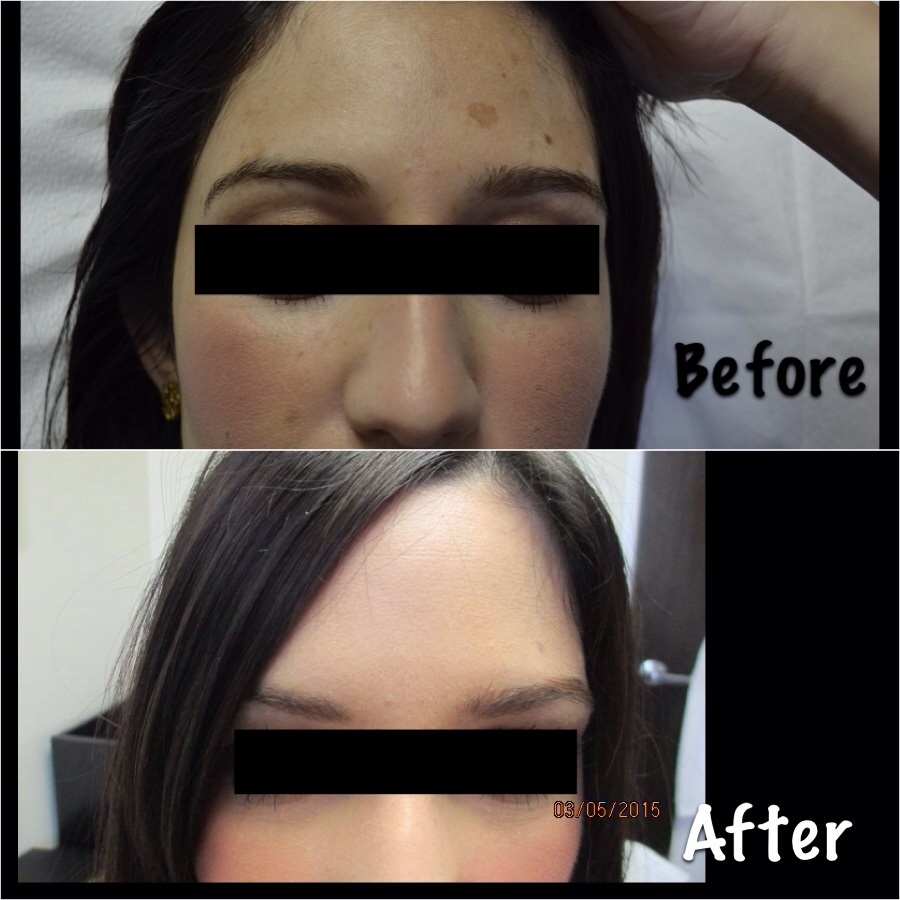