What is skin cancer:
Skin cancer is uncontrolled growth of atypical cells in the outermost portion of the skin called the epidermis. The epidermis is composed of basal cells, squamous cells, melanocytes, and merkel cells. When the DNA of these cells are damaged, mutations occur that result in the skin cells dividing rapidly forming malignant tumors, also known as cancers. The main types of epidermal skin cancers are basal cell carcinoma (BCC), squamous cell carcinoma (SCC), melanoma (MM), and merkel cell carcinoma (MCC).
The vast majority of skin cancers are a result of ultraviolet radiation either from the sun or artificial lights such as tanning beds. Thankfully, when caught early skin cancers can be easily treated. In some cases, skin cancer is detected while the tumor is still confined to the epidermis and in these cases we call this in-situ or superficial such as melanoma in-situ, squamous cell carcinoma in-situ, or superficial basal cell carcinoma.
FAST FACTS ABOUT SKIN CANCER:
More people are diagnosed with skin cancer each year in the U.S. than all other cancers combined.
1 out of 5 Americans will develop skin cancer in their lifetime
–More than 1 out of every 3 new cancers diagnosed in the United States are skin cancer
–The diagnosis and treatment of non-melanoma skin cancer (BCC and SCC) has increased by 77% between 1994 and 2014
–The five-year survival rate for people whose melanoma is detected and treated before it spreads to the lymph nodes is 99 percent. Five-year survival rates for regional and distant stage melanomas are 64 percent and 23 percent, respectively.
–Research indicates that the overall incidence of BCC increased by 145 percent between 1976-1984 and 2000-2010, and the overall incidence of SCC increased 263 percent over that same period
–90% of non-melanoma skin cancers are due to ultraviolet radiation exposure (sunlight)
–The incidence of many common cancers are falling while the incidence of melanoma is rising at a faster rate than that of any of the seven most common causes of cancer
–The survival rate of melanoma in-situ (caught early) is 99% while the survival rate of advanced melanoma is approximately 15%.
Basal Cell Carcinoma:
Basal cell carcinoma (BCC) is the most common form of skin cancer with approximately four million cases diagnosed annually. BCC is rarely fatal but can be highly disfiguring which is why early diagnosis and treatment is essential. BCC looks like red patches, pink growths, shiny bumps, or scars with elevated rolled edges. It is common for BCC to itch, scab, crust, ooze, or bleed. BCC most commonly occurs in sun exposed areas of the skin such as the face, upper chest, and arms. It is uncommon for BCC to metastasize to lymph nodes or other organs, if left untreated it will continue to grow and can be disfiguring, locally invasive, grow deeply within the skin and bone. Delaying treatment can also result in a higher risk of recurrence and the skin cancer will enlarge over time. There are several treatment options available of BCC and the best treatment would depend on the tumor type, size, depth, and location.

Squamous cell carcinoma:
Squamous cell carcinoma (SCC) is the second most common form of skin cancer with more than 250,000 cases diagnosed annually with approximately 2,500 deaths. SCC is characterized by the accelerated abnormal growth of squamous cells within the epidermis most commonly caused by DNA damage secondary to ultraviolet radiation exposure (sunlight). Aside from ultraviolet light exposure, other risk factors include weakened immune system, history of skin cancer or actinic keratoses (precancers), age over 50, fair skin, male gender, history of chronic infections or burns/scars, and history of human papillomavirus (HPV) infection. When SCC is diagnosed early, the vast majority of these cancers are curable with local treatments such as surgery. It is important not to delay treatment of SCC as advanced stages are more difficult to treat and can become dangerous by spreading the lymph nodes or distant organs. There are several treatment options available for local cutaneous SCC and the best treatment option depends on the tumor type, size, depth, and location. 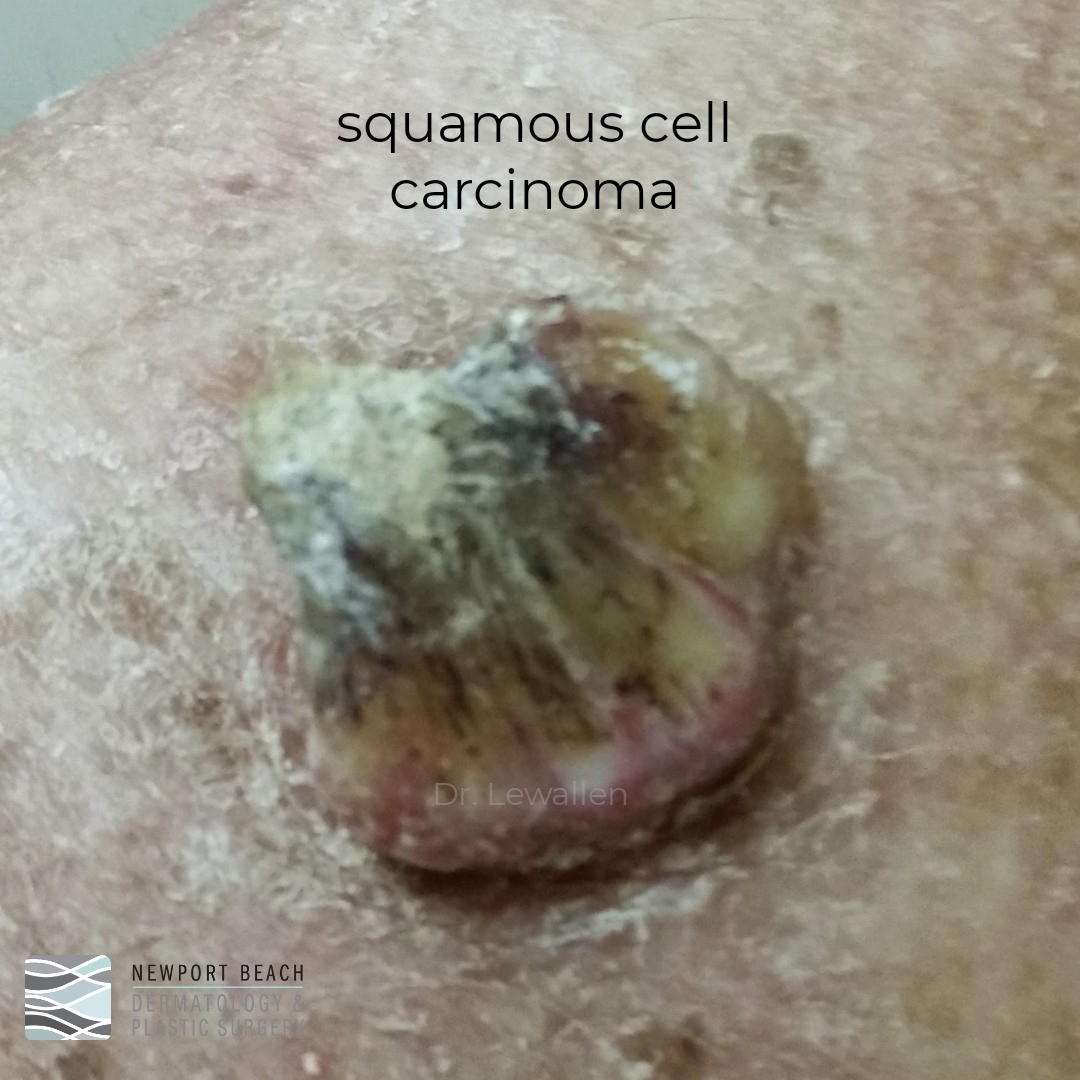 Melanoma:
Melanoma is the third most common form of skin cancer. Melanoma occurs when the melanocyte gets a mutation in the DNA resulting in accelerated growth.It is anticipated that approximately 196,000 new melanomas will be diagnosed in 2020 with 6,850 deaths. While the incidence of melanoma has been rising the number of deaths has been declining by about 2% a year likely attributable to recent advances in treatment of advanced stage melanoma. Risk factors for melanoma included unprotected ultraviolet light exposure, weakened immune system, numerous moles, fair skin, history of melanoma, and genetics. Melanoma is more dangerous than BCC and SCC due to its ability to spread beyond the skin to lymph nodes or other organs more quickly if not diagnosed and treated at an early stage. Melanoma arises most commonly on the legs of women and on the trunk/back in men. For early detection it is important to check yourself for any new or changing moles in both sun-exposed and sun-protected areas of the skin using the ABCDE criteria or “ugly duckling” sign can be helpful. The ABCDE criteria are Asymmetry, Border Irregularity, Color Variation, Diameter (larger than the end of a pencil eraser) and Dark, and Evolution (changing over time). The diagnosis of melanoma is often made with a skin biopsy. After the diagnosis is made, the next step is to determine the stage of the melanoma. This is sometimes done with the biopsy alone but in other cases additional testing such as CT or PET scans, blood work or lymph node biopsies are needed. Treatment varies based on the stage of the disease; the majority of cases can be treated with a local outpatient surgery but more advanced stages may require chemotherapy or immunotherapy. 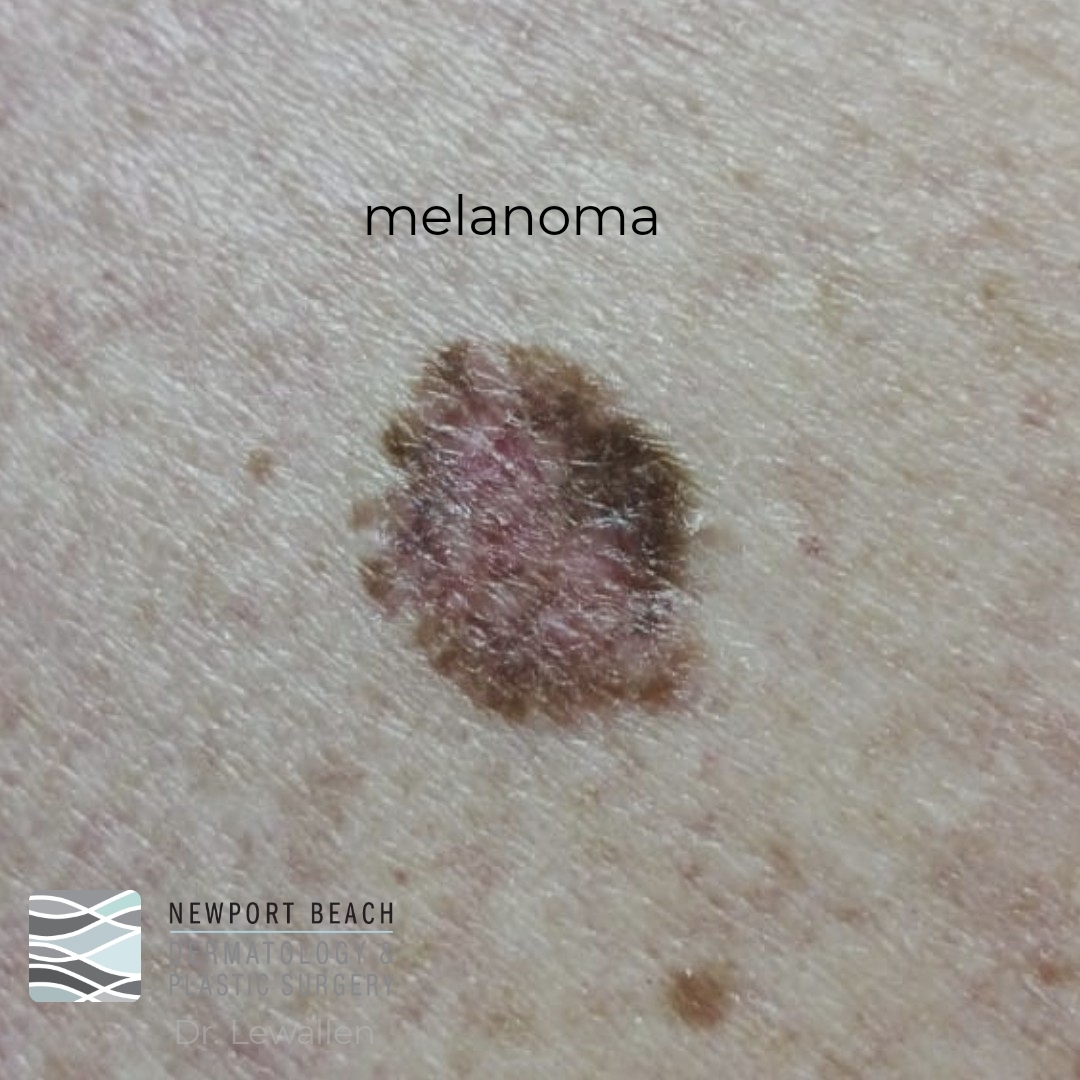 Merkel Cell Carcinoma
Merkel cell carcinoma (MCC) is a rare but aggressive form of skin cancer that arises from the merkel cells in the epidermis. MCC has a higher risk of recurrence and metastasis than BCC, SCC, and melanoma. It is 40 times more rare than melanoma with approximately 3,000 cases per year in the United States. Risk factors for MCC include sun exposure, age greater than 50, and immunosuppression. MCC often occurs on sun exposed areas of the skin such as the face, neck, and arms. MCC often starts as a pimple-like bump that is red, purple, or bluish-red that rapidly grows over time. While MCC is about 3 to 5 times more deadly than melanoma, there are new treatments being developed in the field of immunotherapy which has resulted in improving MCC survival rates over time. 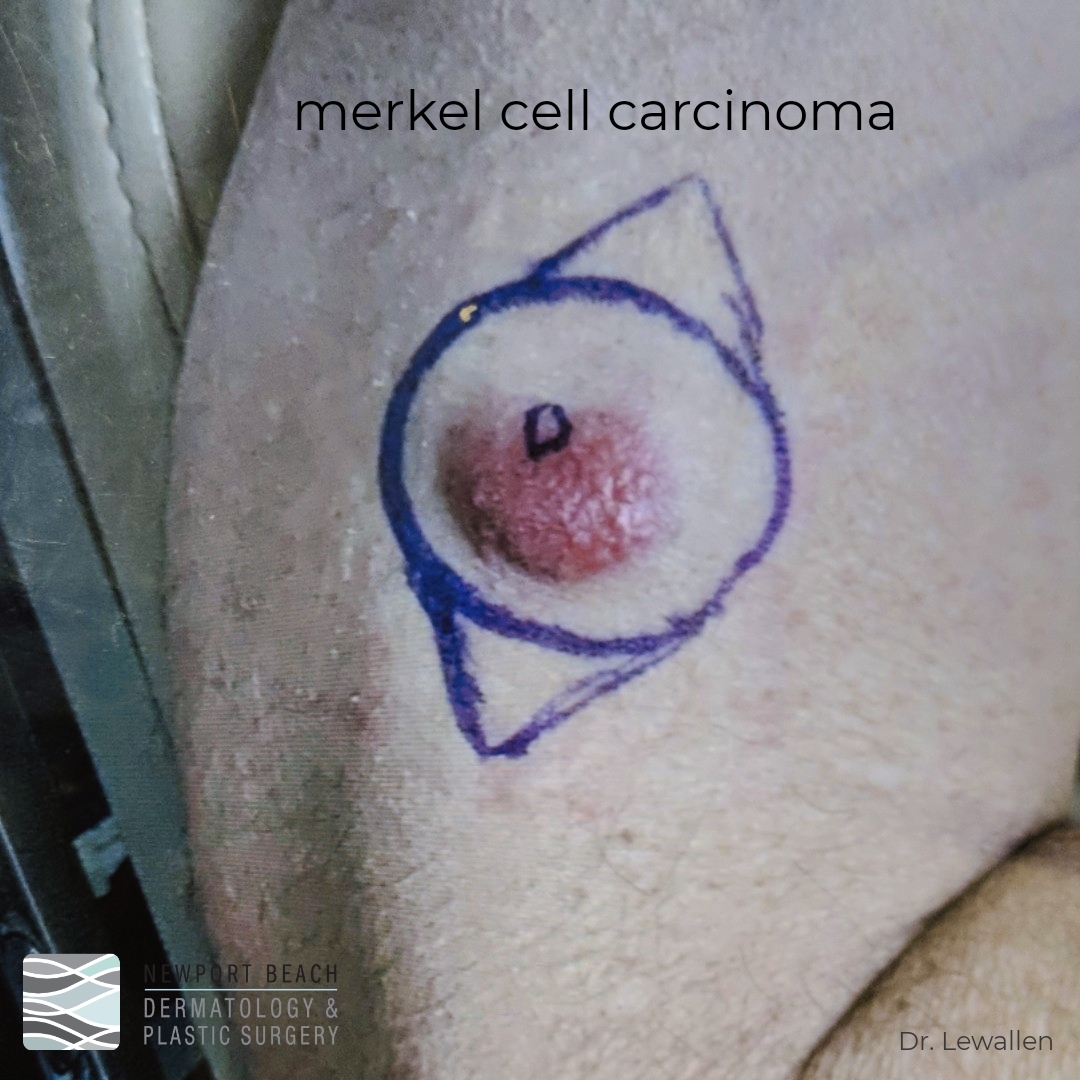